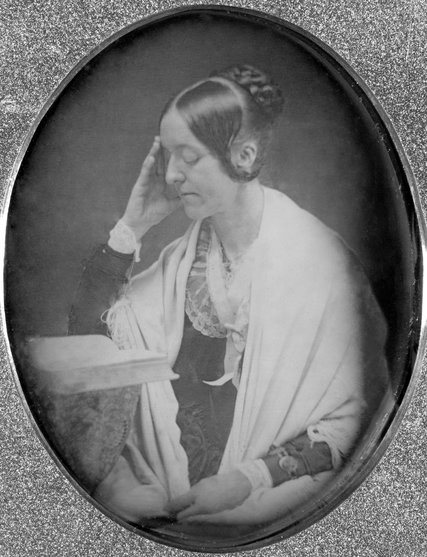 Margaret Fuller (May 23, 1810 – July 19, 1850) was one of the leading public intellectuals of the nineteenth century, and a dynamic cultural force both in the United States and in Europe. She was born into New England elite and cultivated her education since an early age. As a young child, under the tutelage and scrutiny of her father, she acquired a classical education. Later she attended schools in Cambridge, Boston and Groton, where a combination of formal and informal education put her on a par with her male counterparts who went off to college.

Her first published article appeared in 1834 in the North American Review, and since then, she endeavored to contribute to the American cultural landscape through a variety of outlets, as teacher, translator and cultural mediator, as public intellectual, as editor and journalist, as social and political analyst, as protofeminist. In 1836 and 1837, when her family faced financial difficulties, she taught at the Bronson Alcott’s school and in Providence. Meanwhile, her constant interest in both German literature and theories of translation resulted in her translation of Johann Peter Eckermann’s Gespräche Mit Goethe published in 1839 as Conversations with Goethe in the Last Years of His Life. The Unitarian Boston of the late 1830s provided an ideal context for Margaret Fuller’s series of “conversations for women,” weekly study groups aimed at discussing art, mythology, and literature. In 1840 Fuller accepted R.W. Emerson’s offer to become editor of the transcendentalist publication The Dial, where she supplied a great amount of material, and where, in July 1843, she published “The Great Lawsuit,” the first version of what was to become Woman in the Nineteenth Century (1845), her feminist contribution to discourses about gender equality. After a trip to the Great Lakes region in the summer of 1843, she wrote and published Summer on the Lakes (1844), where she discussed life on the frontier and the interactions between white people and Native Americans.

In 1844 Horace Greeley, editor of the New York Tribune and key figure of the American publishing world, invited Fuller to work for his newspaper as its literary editor; she accepted and moved to New York City to live with the Greeleys. In the two years she lived in NYC and wrote for the newspaper, Fuller contributed not only literary reviews but also social criticism, addressing some of the most pressing issues of the day, like prison reform, inequality and political activism. Through her columns Fuller claimed an authoritative position as a public intellectual, and her interventions in the public sphere championed social reform and transformations.

When her reformist friends Rebecca and Marcus Spring asked her to join them in their European travels in 1846, Fuller seized the opportunity to finally travel to Europe. On his part, Greeley agreed to pay Fuller for a number of articles as foreign correspondences to the Tribune, thus relieving Fuller of some of her financial strains. The group started their European tour from England, observing the social miseries and degradation of the working classes, visiting reformist projects, and attending to famous literary figures, activists and revolutionaries (Fuller met Giuseppe Mazzini in London, through Thomas Carlyle). In France the group continued with its social engagements, leading Fuller to write in one of her correspondences from Paris that “the need of some radical measures of reform is not less strongly felt in France than elsewhere, and the time will come before long when such will be imperatively demanded.” (Margaret Fuller, “Things and Thoughts in Europe. No. XII” in New York Daily Tribune, 15 May 1847, p. 1:1-3).  During her travels Fuller sharpened her social acumen, while the political circles she came in contact with helped her shape a more radical vision of the future. In the summer of 1847 Fuller, after having toured Europe at length with the Springs, found herself finally parting ways with them. While passing through the north of Italy, in fact, the Springs announced that they were going to continue their travels north, visiting Germany, and returning to the U.S.  This new itinerary did not sit well with Fuller, as she did not want to leave Italy. After some deliberations, Fuller chose independence over the security of traveling with her more affluent friends, who could guarantee her a chaperon as well as material and financial assistance. This decision marked the beginning of her solitary stay in Italy, and her long sojourn in Rome.

As she wrote in one of her articles for the Tribune in 1848, Europe seemed to agree with her, contributing to the development of her version of cultural cosmopolitanism, entwined with national aspirations and revolutionary ideals: “In Europe, amid the teachings of adversity a nobler spirit is struggling –a spirit which cheers and animates mine. I hear earnest words of pure faith and love. I see deeds of brotherhood. This is what makes my America.” (Margaret Fuller, “Things and Thoughts in Europe. No. XXIV” in New York Daily Tribune, 15 June 1848, p. 1:1-5). Unlike many travelers who saw Italy exclusively in terms of its glorious past and artistic relics, Fuller was able to focus on Italy in its contemporary actuality of political turmoil. Furthermore, and for the first time, answering her call to personal political engagement, she found herself very close to the locus where important historical events were unravelling. In Italy Fuller, in fact, positioned herself in the midst of a network of international and cosmopolitan relations, sharing with some of them projects for a republican future.